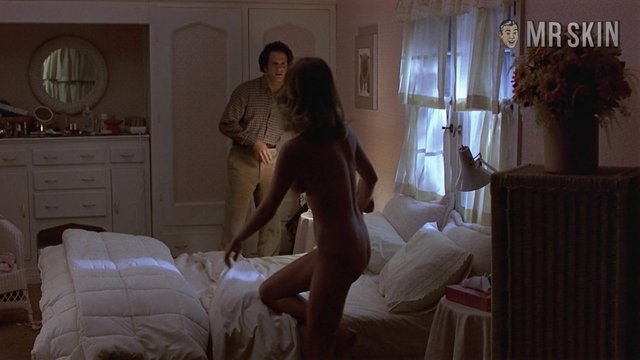 Modern Romance (1981)
Nude, breasts, butt 00:46:00 She doffs her duds to hit the hay with Albert "Back Rug" Brooks and takes away from his hairiness with her lovely T&amp;A.

bedroom in bed skinvision getting in bed

Modern romance is on display at the behest of Albert Brooks, who co-wrote, directed, and starred in this 1981 comedy. The film also stars Kathryn Harold as Mary Harvard and Bruno Kirby as Alert Brooks’ coworker and primary confidant. Robert Cole (Albert Brooks) is a big-time movie director (hey! like in real life!) struggling through his relationship, unsure if he should dump the babe he’s got and find a new one, or hold onto her like biscuits hold gravy. Ultimately he dumps her, but soon discovers that romance in the 1980s (we can’t really call that modern anymore, can we?) isn’t as easy as he bargained. Cue hilarity.  Kathryn Harold’s acting skills get a break from being under the microscope, as the audience gets a peep at what lies beneath. What lies beneath turns out to be some great boobs and butt on display, but be careful not to be incredibly distracted by how hairy Albert Brooks is. Seriously, it’s rough.