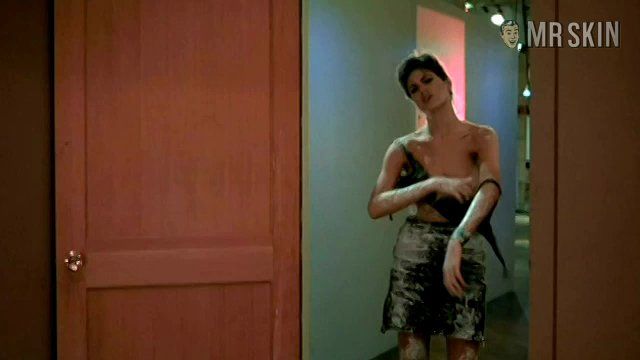 After Hours (1985)
Nude, breasts 00:20:00 Fiorentino lets her fiery tit-o's free when she removes her bra for her stammering beau, flings the offending undergarment over her shoulder, and strolls down the hall.

Back in the mid 80s, Martin Scorsese made the dark comedy After Hours (1985). It’s about an office drone named Paul who catches a glimpse of a lady named Marcy one night, and they arrange to meet at Marcy’s apartment after finding they have a connection with one another. The only problem is that Marcy’s place is about fifteen miles away, and everything wrong that could happen along the way happens, and it’s grim and hilarious. Playing Marcy is Rosanna Arquette at the peak of her hotness. She has no nudity, but she sure comes close, lying in a bed wearing nothing but a g-string and covering up her rack with her arm. Linda Florentino, though, gives us a bit of tit action, along with plenty of underwear scenes. Before he brought you Goodfellas (1991), he brought you these great ladies!