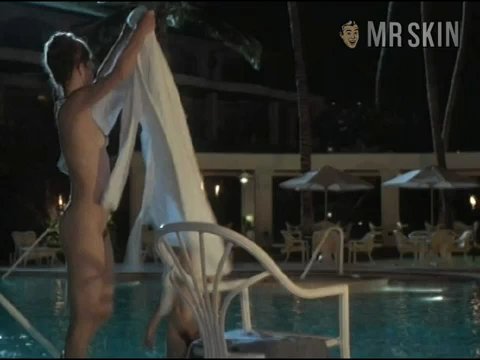 Exit to Eden (1994)
Nude, breasts, bush 00:37:00 Dana flashes some seriously furry full-frontal flesh climbing out of the pool so her equally naked assistant can help her into her robe. It's so Skintastic, words can't describe it!

Exit to Eden (1994) is a comedy. It stars comedians Rosie O'Donnell and Dan Aykroyd as LAPD detectives hot on the trail of a diamond smuggler and his female accomplice, the model Iman. Exit to Eden is also one of the hottest mainstream skintaculars ever released, taking place on Eden, an island paradise dedicated to S&M and B&D. The head mistress is Dana Delany, and when she's not sexily decked out in skin-tight fetish gear, she's completely naked! She exposes her heavy breasts and buns numerous times and has a lengthy full frontal getting out of a pool and drying off. Stephanie Niznik, as Dana's assistant, also has a full frontal in the same scene. Julie Hughes, Sandra Taylor and Tanya Reid are topless and in thongs while being introduced to the island guests, along with even more anonymous flesh in the background. If Eden were this good, Adam never would have taken a bite out of Eve's apple.