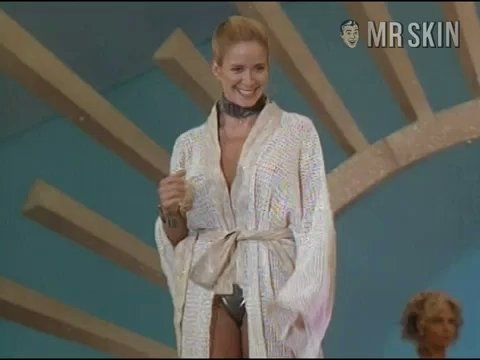 Exit to Eden (1994)
Nude, breasts, thong 00:26:00 Julie lets her jugs out on the runway, much to the collective delight of the hedonistic crowd.

Julie Hughes, who is a casting director first and foremost, has done a smite of acting in her time, mostly in movies you have never heard of, although she did appear in one of our all-time favorites, Exit to Eden, but was woefully overlooked due to the complete nudity of uber-hot Dana Delaney. She has worked on some big movies as a casting director, such as A Chorus Line, but sadly, you can’t see casting directors nude in the movie… However, in 1995’s Stormswept, she appeared quite nude, lying on a couch, seemingly masturbating. In another scene, she is seen to be having her “carpet munched” by a hunk of a young man, which provides us with yet another look at her wonderful breasts.

2 Pics & 1 Clip
Nude, breasts, thong 00:26:00 Julie lets her jugs out on the runway, much to the collective delight of the hedonistic crowd.
Live Cams - View all