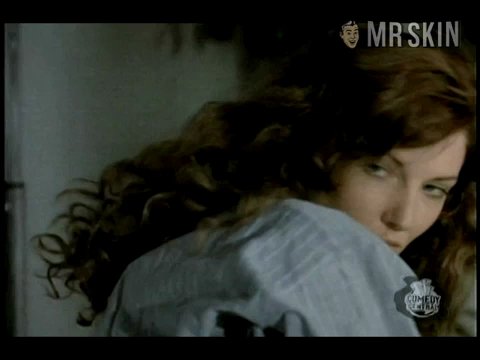 48 Hrs. (1982)
Nude, bush 00:05:44 FULLSCREEN VERSION: Annette buttons one of Nolte's shirts over her buxom bod. You might think you see nothing, but look again and you'll spot a fast flash of Annette's A-nude bush!

There may have been buddy movies before, but 48 Hrs. (1982) broke the color barrier and was as important an event as when Rosa Parks refused to sit in the back of the bus. Casting former Saturday Night Live funnyman Eddie Murphy as Reggie Hammond, a con on 48-hour leave from prison to help a black-sheep cop, played grumpily by Nick Nolte, retrieve a bag load of stolen money from bad guy James Remar, is inspired. The story line may not be that original, but it's never less than entertaining. Plus, there are enough skin flashes to keep the blood pumping between chase scenes and shootouts. Mini-topped Greta Blackburn and Denise Crosby keep the boobs a-flapping, while Annette O'Toole looks fine even if covered in too many clothes. This is one movie to see with a special buddy, preferably the one in your pants.