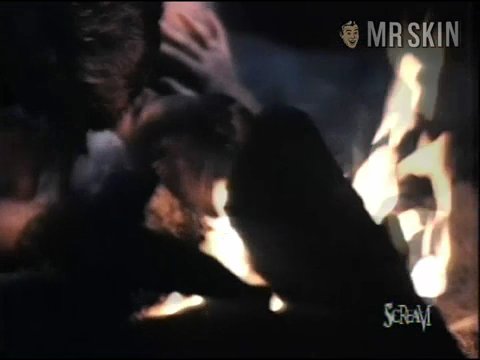 Massacre at Central High (1976) Nude, breasts 00:42:00 Nice looks at Kimberly's cannons as she engages in a little intercourse with Andrew Stevens on the beach. No wet spot issues here!
+4
More Pics &
Clips >>

Unfamiliar with comely Kimberly Beck? Time to get acquainted! This very fine-looking act-chest (check out that meat rack!) has appeared in guest spots on more than twenty TV series, as well as in recurring roles on shows like Peyton Place, Lucas Tanner, Westwind, General Hospital, Fantasy Island, Dynasty, and Capitol. Sadly, these outings did very little to further her career, so she continues to take on bit parts in TV and cinema. You can ogle her beauty in such films as Killing Zoe (1994) and Independence Day (1996). In Hollywood terms, no, Kimberly is not a star. Here at Skin Central, however, she's reached the highest pinnacle of delight with her contribution to Massacre at Central High (1976). She reveals her bodacious bosom for the only time in her long, supporting-parts career. It certainly gets our supporting parts taking notice. Besides her ample breasts, Kimberly goes for the prerequisite skinny dip and shows off the kind of tush that is hypnotic in its juicy charms. The only massacre in that movie is the millions of dead sperm dried up on the theater floor.

4 Pics & 2 Clips
Nude, breasts, butt, bush 00:32:00 Get a load of Beck's pecs, as well as her glutes and muffwich, as she cavorts in the waves with a lucky lad.
Nude, breasts 00:42:00 Nice looks at Kimberly's cannons as she engages in a little intercourse with Andrew Stevens on the beach. No wet spot issues here!

Eight Is Enough - as Nancy Bradford