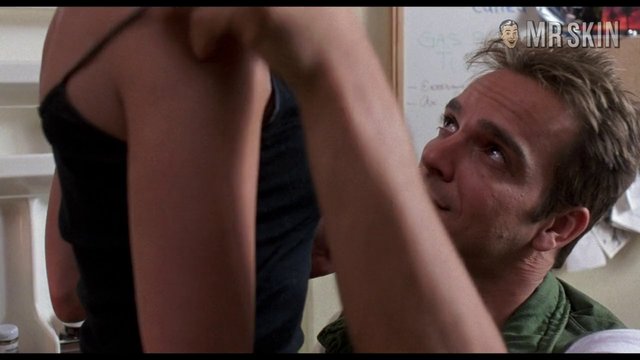 Extremities (1986)
Nude, breasts 00:37:00 Farrah's fella pulls down her dress and exposes her right Extremity. Although you don't see her face, there's no mistaking that famous nip, and most believe that boob is hers.

Extremities (1986) is based on a Broadway play, and it shows—Farrah Fawcett and James Russo put in big-stage performances in this story of an assault victim, scorned by the five-O, who takes matters into her own comely hands. Foxy Farrah survives a harrowing ordeal with  Russo, who makes off with her wallet. The cops scoff at the idea of being able to find him, let alone hold him, and the fact that he knows where fair Farrah lives doesn't seem to make them any more inclined to serve and protect. When Jimmy shows up at her place with a day of torture planned, Farrah takes command. Who needs the law? This kitten's got claws! And nips! That slip! And strip! More than once! It's clear why Farrah and her golden areolas were nominated for a Golden Globe for her reprise of her off-Broadway role, even if the nips make a very short appearance.