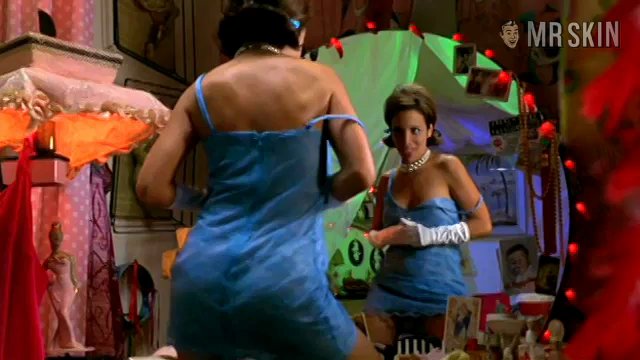 Blue in the Face (1995)
Nude, breasts 01:04:00 Great scene with boobs included when she changes clothes while dirty dancing in front of a mirror. You'll be Blue in the Crotch!

The pseudo-sequel to Wayne Wang’s comedy about a Brooklyn smoke shop, Smoke, was called Blue in the Face (1995). Many of the same characters return for some strung together improv sketches, and they all philosophize and make observations about the sort of everyman’s aspects that shows like Seinfeld banked on. Topics about smoking, women, race, diversity, community, food, and relationships get fleshed out comedically from a plethora of famous names and faces spanning from areas like independent film, pop culture, comedy, and music. It was filmed almost exactly a week after the rap of Smoke, which is why some of it feels like familiar territory. As far as nudity goes, Mel Gorham, the busty Latina, has a scene where she’s stripping in front of a mirror and shows us her fantastic funbags. I’d like those things in the face!