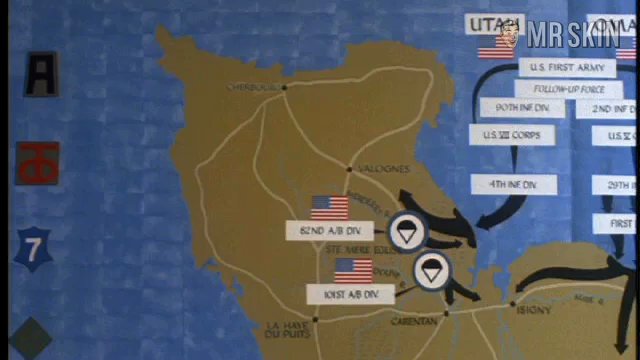 Basic Training (1985) is the recipe for world peace--that is, by giving guys a piece of ass. Ann Dusenberry is the genius behind the laying down of arms, when as an entry-level worker at the Pentagon she lets down her arms so the brass can polish their brass when they lie down with her. Yes, generals are major hard-ons and will do anything a bare bosom says. Soon Ann is running the military, and when she discovers that the Russian Bear is just as frisky, world domination is next on her arousing agenda. Along the way a slew of extras, including Barbara Peckinpaugh, get viewers' peckers in paw with ample, anonymous nudity. Angela Aames proves her aim is true and flashes titty, and Rhonda Shear flashes jug while riding a whale of a guy to the big O, and we don't mean ocean. Thanks to Ann and her carnal corps, you and your army of one will be very happy.