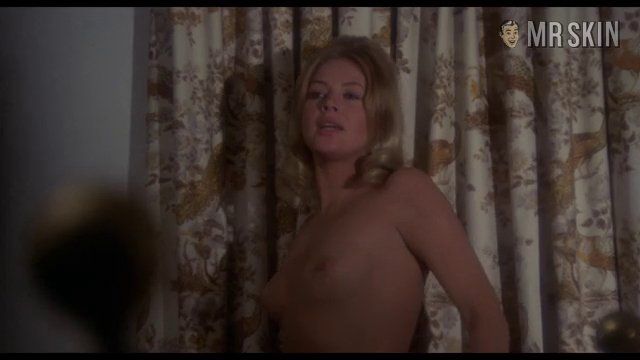 The Wicker Man (1973)
Nude, breasts, butt, body double 00:53:21 This golden-tressed goddess croons a pretty tune, dancing around her apartment starkers. She bares quite a bit of Britt tit, but the buns? They ain't hers!

Hard to believe, but the original negative of The Wicker Man (1973) was reportedly sold as landfill. Thankfully the film has since gone on to much acclaim as a British horror classic. Edward Woodward stars as a devout Christian policeman summoned to a Scottish island to investigate a young girl’s disappearance. He’s soon disturbed to find that the pagan ladies of the place are quick to doff their clothes--and the heavenly line-up of heathens includes Britt Ekland, Ingrid Pitt, and Lorraine Peters. This amazing thriller may lead to a shocking climax, but the femme cast does their best to prompt many more pleasant ones.

Nude - as Girl on Grave