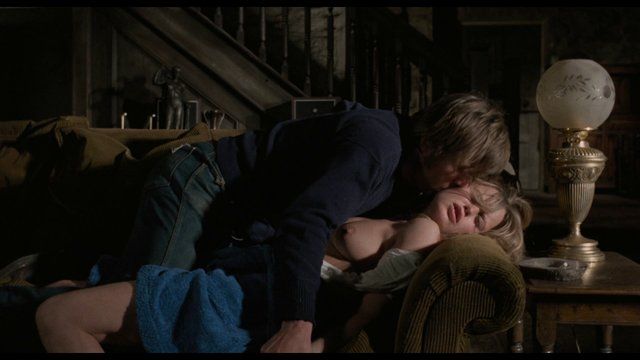 Straw Dogs (1971)
Nude, breasts 00:58:35 Susan's breasts get plenty of screen time as she's held down and assaulted by her drooling ex-boyfriend.

Dustin Hoffman is a supremely pussified mathematician who moves back to his wife Susan George's hometown in Scotland so he can have some solitude and get some work done. The natives have some other plans, though . . . the most important of which involves getting their filthy mitts on Susan. Director Sam Peckinpah does an outstanding job blurring the lines of all the conflicts, except, of course, the revenge aspect, which exonerates Hoffman in the end. Or does it? In either regard, I'll never look at antiques in quite the same way ever again. All of the disturbing aspects of the film aside, George makes the whole thing worth watching if for no other reason than she sports bra-free sweaters and shirts throughout the movie and even manages to let her puppies loose a couple of times. The revenge aspect of the film is great, as well, especially for all those Underdog-Rooting fellers out there, but one glimpse of Susan's rack will most assuredly make even the hardiest of souls weak in the knees.