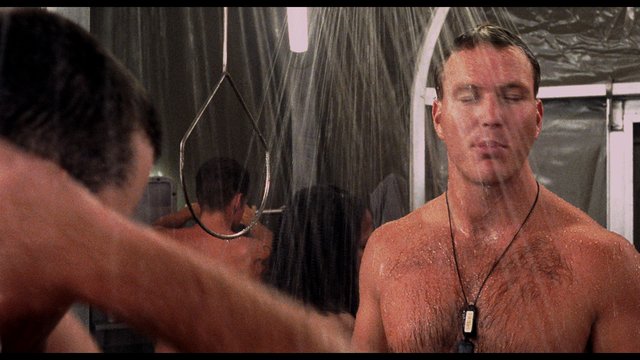 Starship Troopers (1997)
Nude, breasts, bush 00:30:14 The famous coed shower scene features boobs from Dina and Brooke, along with boobs and buns from Tami-Adrian and Blake!

Dutch-born director Paul Verhoeven has assembled a long and varied oeuvre of Hollywood hits (everything from blatantly beavercentric Basic Instinct [1992] to the subtle sexual saturation of Showgirls [1995]). An always adept and flashy commander of story and camera, Verhoeven’s Starship Troopers (1997) transcends parody simply because it goes beyond the kitschy space-invader genre that it pays homage to. The excitement of battle rarely wanes in Troopers, and when there is a lapse in the spectacular and gross special effects, the pause only serves to increase the impact of the next grand mal attack. Starship Troopers is a seizure ready to strike.