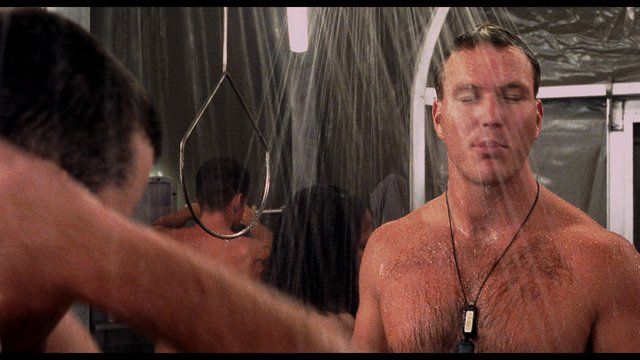 Starship Troopers (1997)
Nude, breasts, bush 00:30:14 The famous coed shower scene features boobs from Dina and Brooke, along with boobs and buns from Tami-Adrian and Blake!

Brooke made the leap into the Skintertainment Industry as ”Miss Hawaiian Tropic” back in the late-1980s, basically landing her incredibly beautiful body on just about every sun-tanning product advertisement in the country. Too bad it didn’t land on me…She then tried on her acting shoes in 1990’s Feelin’ Screwy but when that particular path didn’t pan out for her, Brooke moved on to the world of the Los Angeles Raiderettes squad, bumping her bodacious butt across football fans’ TV screen across the country. There was much rejoicing.In 1994, Brooke returned to Skinematic endeavors, taking a bit part in the straight-to-video release Score with Chicks, although it wasn’t nearly as Skintillating as we had hoped for. Nevertheless, she trudged on and eventually landed a bit part in the surprise blockbuster Starship Troopers in 1997. Sure, it was a miniscule role but we’re here to tell you that the brief glimpses of her ample bosom during the co-ed shower scene are more than worth the wear-and-tear on your pause button… A nicer rack has yet to be seen!

5 Pics & 1 Clip
Nude, breasts, bush 00:30:14 The famous coed shower scene features boobs from Dina and Brooke, along with boobs and buns from Tami-Adrian and Blake!
Live Cams - View all