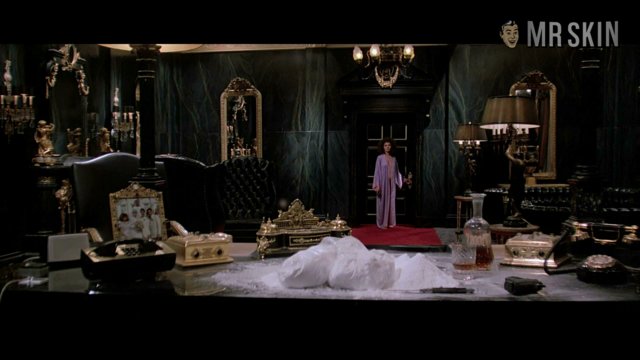 Scarface (1983)
Nude, breasts 02:35:38 Mary bursts in on coked-out Pacino while she's wearing and open robe and popping off a pistol. She plays Tony's sister, and we see her left Montana.

The paradigmatic gangster flick Scarface (1983) chronicles the rise and fall of Cuban drug lord Tony Montana (Al Pacino), whose appetite for power and growing coke-fueled paranoia lead to his spectacular and memorable bullet-riddled demise. In the late 1990s Scarface experienced a sort of rebirth as one of the touchstones of gangsta rap culture, but even the most white-bread among us can appreciate the film’s non-stop brutality--and the fact that it’s peppered with nudity. Check out blonde bombshell Sue Bowser’s T&A as she gets totally unwrapped in bed with Tony’s second-in-command.