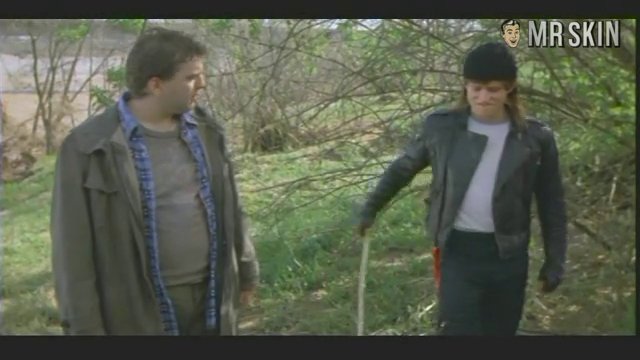 River's Edge (1986)
Nude, breasts, bush 00:15:00 Danyi lays dead in a field with her (still hot) nipples and nether-hair in excellent view as Crispin Glover and a gaggle of burn-outs investigate the scene.

At the River's Edge (1986) is a dead and naked Danyi Deats. Her burnout high school boyfriend killed her and then shows off her lifeless full-frontal shrubbery to his pals. Sick stuff, and based on a real-life story. Cripsin Glover decides to cover up the crime, but Keanu Reeves ends up ratting to the police. So, goodbye gratuitous nudity from Danyi, and hello gratuitous kookiness from Dennis Hopper as a crippled ex-biker, whose significant other is a blow-up sex doll. He helps the kids, mostly by smoking pot with them, though he eventually wishes they didn't bogart Danyi. She shows some fine grass between her legs.