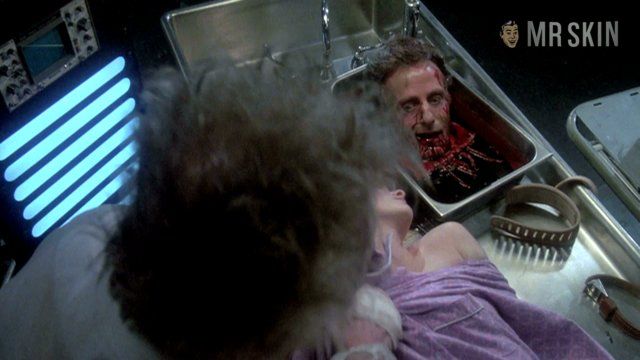 Re-Animator (1985)
Nude, breasts, bush 01:09:15 Ample breastage and a quick look at the bush as Barbara is strapped to table, stripped and terrorized by a disembodied head.

Prior to appearing in Re-Animator (1985), Barbara Crampton made her nude debut in Body Double (1984), but this Scream Queen hardly needs a body double (though she did use a naked stand-in for her sex scenes in Poison [2000]). If Barbara gives you Cramptons in your crotch, then this is the movie to release that pent-up desire. She’s never been more naked, and the flesh comes with enough gore and guffaws to keep everyone happy. Re-Animator is the first in a series of campy horror classics about a mad scientist who develops a serum that, well, re-animates the dead. It does wonders for your dead wood too!