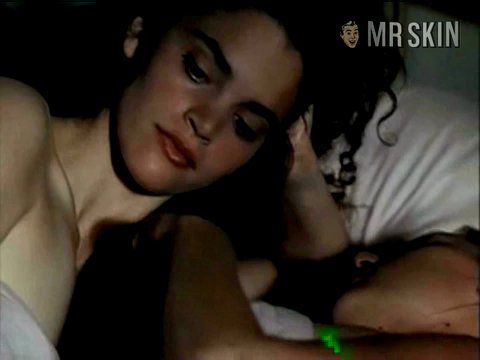 Double Exposure (1994)
Nude, breasts 01:24:00 Left tit when getting some lesbo love in bed with Jennifer Gatti.

In the killer thriller Double Exposure (1993), Roger Putnam (Ian Buchanan) suspects his wife, Maria (Jennifer Gatti), is up to something. Specifically, he thinks she's seeing another man. Otherwise why would she always get back so late from the gym classes she takes with her pal Linda (Dedee Pfeiffer)? Roger finally hires private dick John McClure (Ron Perlman) to do some snooping. It turns out that Maria's stepping out (and going down) all right—with Linda! The jealous husband wants his wife's lover murdered, but the whole deal plays out in ways that no one could have expected. However, when you see Jennifer and DeDee in naked lesbian embrace, you should expect to become erected.