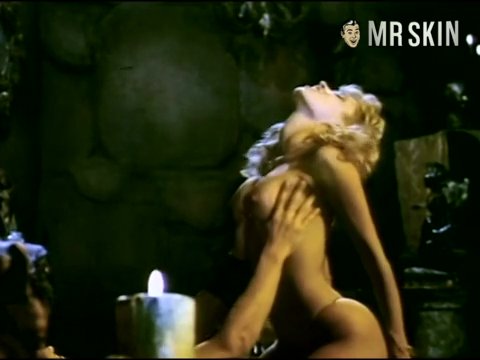 Deathstalker II (1987)
Nude, breasts, thong, underwear 01:08:00 She deftly doffs the upper portion of her fetching bra n' thong combo when she and her man get down to some huggy, kissy, casaba-squeezing action on a bed.

The barbarian skinvasion continues in the T&A-filled fantasy epic Deathstalker 2 (1987). In this (unintentionally) hilarious cheesefest, John Terlesky takes on the titular role, a barbarian warrior who wins the affections of Reena the Seer (Monique Gabrielle) after helping her out of a jam. The grateful sorceress reveals that she’s actually the deposed Princess Evie, out to reclaim her place on the throne. You know Deathstalker is always up for a good quest, so the duo sets out to restore Evie to power, one cracked skull at a time.  Maria Socas teases the camera as she changes behind a sheer curtain, and Toni Naples Or rather, her body double) shows her snookers under a strobe light, but it’s softcore starlet Monique Gabrielle who really shows these lusty ladies how tit’s done. She first flashes her funbags as some creeps try to go all the way with her in the woods 1 hour, 5 minutes in, and pops her top to reveal some excellent rackage in the sack with her guy a mere three minutes later. That’ll put the horns on your helmet!