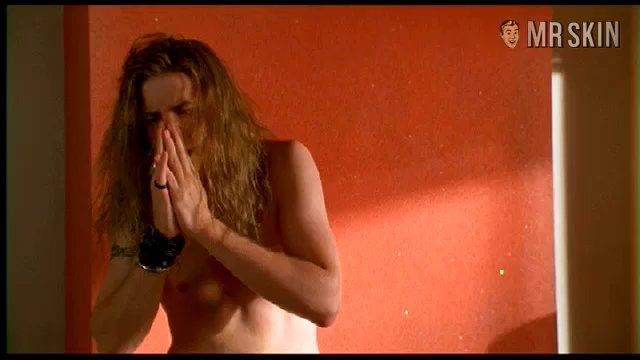 Airheads (1994) is good dumb fun with a quality cast and some big laughs. When a three man band that calls themselves The Lone Rangers (played by Adam Sandler, Brendan Fraser, and Steve Buscemi) find themselves turned down by a record label, they take their demo to a radio station which also refuses to play it. Refusing to accept defeat, the guys arm themselves and take the station hostage until they get their music on the air. Amy Locane plays one of the rocker’s girlfriends and she gives us a good view of her tight body in a skin tight leotard and a hot little thong bikini that is rumptastic! A young Sandler hooks up with Nina Siemaszko on a couch and she delivers a jiggly performance as their hookup is interrupted. As she argues with the station manager, her bra busting boobs bounce and strain against her seriously stressed boulder holder. There is no full nudity here, but these sexy ladies show enough skin to give you a chance to hold your little station manager hostage in between the laughs!