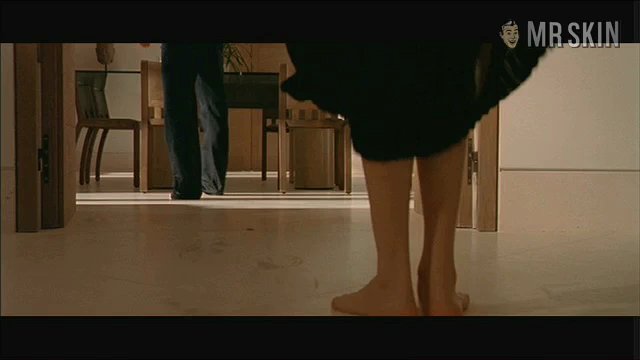 The Transporter (2002)
Sexy, underwear Qi Shu is skintastic in this sexy scene!

Jason Statham (Snatch, Ghosts of Mars) plays Frank Martin, a professional transporter who, well, transports things even if it includes giving bank robbers a getaway ride. He has it down to a science; the kind found in second grade home chemistry sets. He needs to know the precise size and weight of his cargo, delivered in a souped up BMW. When four passengers show up instead of three, he refuses to move because it will screw up the travel plans. It changes the alotted gas, the weight of the car thus affecting speed. Sounds very professional, except how many force majueres could happen in a high-speed car chase especially after he’s given the cops a head start by taking the time to explain ALL of this to the thieves as they sit in front of the crime scene. But, hey, this guy has rules. That’s right – the rules. Three of them. Rule #1 – The deal is the deal. (No changes.) Rule #2 – No names. Rule #3 – Never feed him after midnight. (Just kidding.) It’s actually, “Never look in the package.” Speaking of looking, Shu Qi, so thankful to The Transporter for saving her life after the Waterworld scene, gets down to a little cave diving herself as she strips down to her wet underwear to make love. No nudity, but still nice.