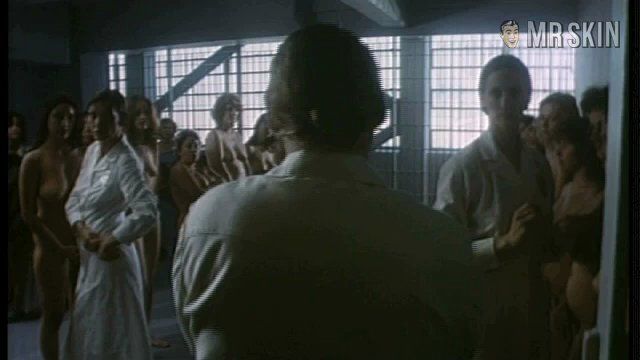 The Lady in Red (1979)
Nude, breasts, bush 00:25:00 Nancy Drew stands nude in prison with dozens of other naked gals, before being asked to bend over for "further inspection". Nice look at her rack, but all else remains hidden.

Pamela Sue Martin, TV's Nancy Drew, plays Polly, a 1930s girl who goes to Hollywood to find fame and fortune and winds up in dead-end Chicago instead. It's even worse for Polly than it was down on the farm, and it's not long before she winds up in prison. Gentlemen, start your engines. Women's Prison: home of the group shower, catfights in "the yard," and sweat-soaked skin tawny from the sun. When Polly and her pokies finally get sprung from the pokey, she begins working at a whorehouse run by Nurse Ratched herself, Louise Fletcher. This gal's really reaching for the stars. Things take an upturn when she begins dating all-around great guy Robert "Knock it off, I dare ya" Conrad. But as luck would have it, he's America's Most Wanted poster boy John Dillinger. Polly wanna cracker? Wearing a red dress when Dillinger was shot down, Polly becomes known as the famous "Lady in Red" of the title.