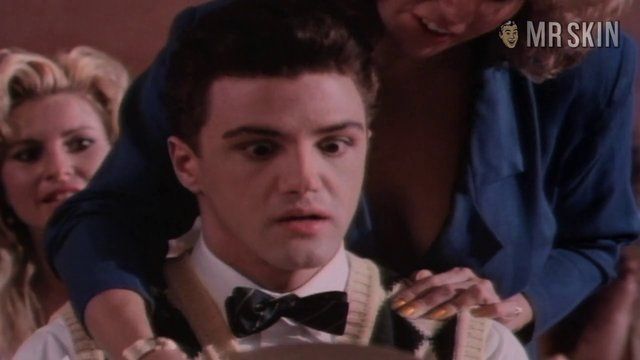 Senior Week (1988)
Nude, breasts 00:01:15 Vicki Darnell pulls off her shirt to go topless in her classroom for a lucky dude! Soon enough, tons of the girls in class are taking off their tops!

Following in the tradition of raunchy, sex comedies, Senior Week (1987) follows a group of college seniors who travel from New Jersey to Florida to drink, party, and get laid.  The film's lead is Everett (Michael St. Gerard) who not only has to deal with trying to get laid, but also has to deal with jealous girlfriends, lackwit buddies and an English teacher who's followed Everett because he still owes her a paper.  The film opens with a dream sequence in which a dude is flanked by two hot beauties in oversized sweaters only to remove them, baring skin.  A bit later in the sequence, three women introduce themselves, in the nude, with sashes for Miami Beach, Tampa and Daytona Beach, prompting whoever is watching to move to those locations immediately.  Everett's dream teacher "teaches him a lesson" by removing her dress and letting her fantastic puppies breathe, which prompts other female students to do the same.  Stay in school, kids!

Sexy - as Girl from the Magazine