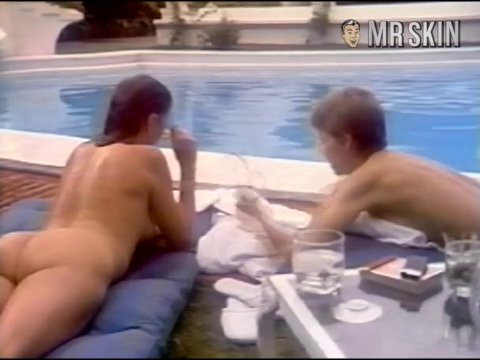 Night Games (1980)
Nude, breasts, butt, bush 00:43:00 Opens with a nice long shot of Joanna's Assidy, followed by a brief boobie shot and a mega-quick look at the bush. Throw in a poolside locale and an equally naked gal-pal and you got yourself a party.

Having already made international sex symbols out of Brigitte Bardot, Catherine Deneuve and Jane Fonda, director Roger Vadim decided to do the same for older actress Cindy Pickett (who was already in her 30s here). She plays a repressed housewife who’s never overcome an early sexual trauma in Night Games (1980). Fortunately, she has an affair with a novelist who decides to use fantasies to reawaken her libido. This leads to plenty of bizarre imagery, including the infamous guy-in-a-bird-suit scene. Viewers also get plenty of old-fashioned arousal from Pickett’s various poses, especially when fellow thirtysomething Joanna Cassidy stops by for some poolside partying.