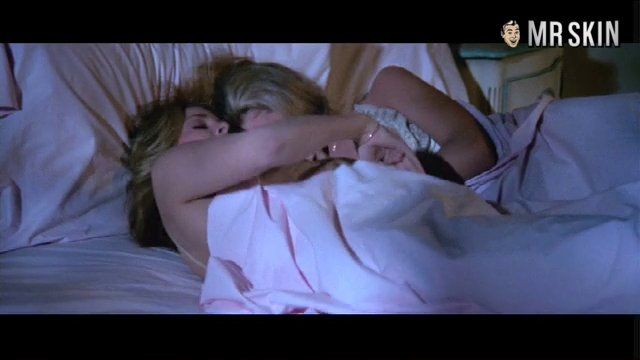 Myra Breckinridge (1970)
Nude, breasts 01:27:08 Fawcett gets her left faucet fondled, then that same Angel pops out of her nightie for a flash of rack.

After going to Europe to have a sex change, Myron Breckinridge—played by film critic Rex Reed--returns to America as the sexy, man-hating Myra Breckinridge (1970)—played by Raquel Welch. Claiming to be Myron’s widow, she becomes a tantalizing (yet terrifying) teacher at her uncle’s acting school, with a male-bashing mission to destroy “the American male and all its particulars.” In her quest to conquer, Myra wears down the biggest macho man in the school and sets out to seduce his gorgeous girlfriend (Farrah Fawcett). All the while, man-eating talent agent Mae West, decked in décolletage-dipping dresses, delivers double entendres and sings sultry songs, adding the bizarro icing to this already nutty cake.