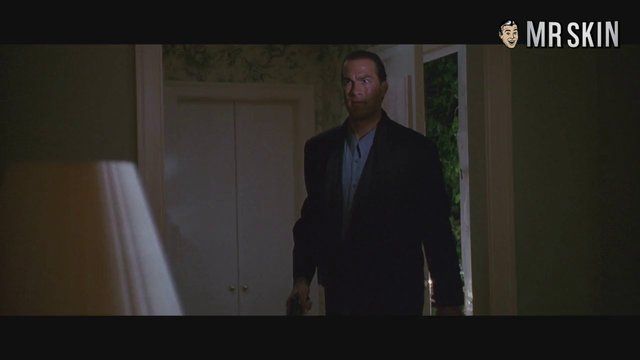 Marked for Death (1990)
Sexy 00:49:26 Liz faces off against the evil Rastafarian, kicking ass and running around, all in a loose-fitting top that allows for some brief cleavage.

Alternately titled Screwface, Dwight H. Little’s Marked for Death (1990) is a globe-trotting action picture that unfolds in the dangerous world of the international drug trade. Action hero Steven Seagal stars as John Hatcher, a DEA agent who thinks about hanging up his boots after his partner is mowed down by a Colombian drug kingpin. When Hatcher’s sister is targeted by a violent Jamaican mob boss, however, the DEA agent decides to get tough and fight the murderers. Aside from all the gunfights and martial arts, Little’s film boasts more than a modicum of skin. Tracey Burch, Elizabeth Gracen, Elena Sahagun, Rita Verreos, and Terri Weigel all lend their uniquely female talents to this two-fisted adventure.