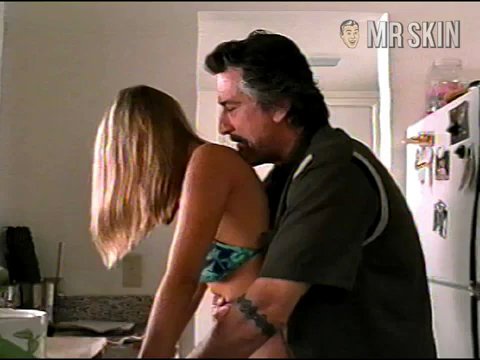 Jackie Brown (1997)
Nude, butt 01:08:03 Nice bun-shot as Bridget walks away after Robert DeNiro has pounded her pooper in the kitchen.

The third film by highly touted director Quentin Tarantino may not have garnered the immediate critical and box-office impact of his first two, but Jackie Brown (1997) will stand the test of time. Not only does Jackie Brown reintroduce the stunningly stacked star of 1970s Afro-American cinema, Pam Grier, as a leading lady of color, the plot puts her in a role that is sympathetic, realistic and overwhelmingly attractive in a mature and dignified way. Adapted from an Elmore Leonard novel, Jackie Brown is a complex, engaging caper film full of credible, likable characters, some of whom find the hope of some semblance of happiness at the end of its entertaining, fast-paced and serpentine plotline.