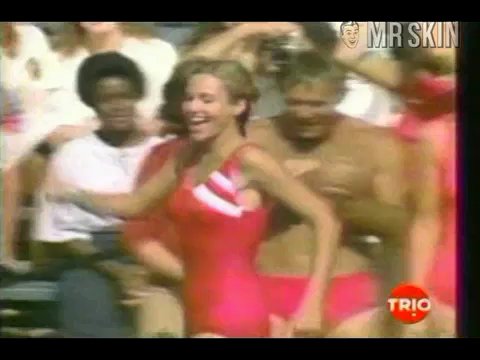 Like Farrah Fawcett and Susan Blakely, Erin Gray made the transition from pioneering supermodel to busy actress. After providing sex appeal in TV commercials for everything from Camay Soap to RC Cola, Gray began making regular guest appearances on sitcoms and dramas. Then she gained a new generation of fans in her role as "Colonel Wilma Deering" on the NBC series Buck Rogers in the 25th Century. Gray's tight white spacesuits got plenty of young bucks fantasizing about where they'd never gone before. Erin would later abandon her jiggle for the long-running '80s sitcom Silver Spoons, but she remained a skinsation every time she got wet for another Battle of the Network Stars. She also proved she could compete with younger sex symbols in her recurring role as "Chief Monica Johnson" during the 1997-98 season of Baywatch.

Buck Rogers in the 25th Century - as Colonel Wilma Deering

Code of Vengeance - as Nadine Flowers