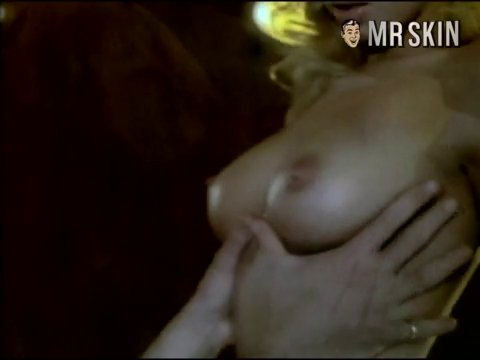 Emmanuelle 5 (1987)
Nude, breasts, butt, bush 00:09:00 Monique shows her mons-ique along with boobs and butt when she seduces some lucky Poindexter.

There's a new Emmanuelle in town. For Emmanuelle 5 (1987), gone is the sexy Sylvia Kristel, replaced by the even hotter Monique Gabrielle. This flick opens with Emmanuelle a superstar. But her luck turns when she is stripped by a mob of adoring fans at the Cannes Film Festival. Things go from bad to worse when the dictator of a banana republic uses the screening of one of her films to get her honey body into his country and into his horny arms. Once there, Emmanuelle becomes his sex slave. Poor Emmanuelle, but happy viewers who get to see all of Monique and a hot harem of naked beauties. Emmanuelle in bondage is just another frame in the lustful loop of the world's greatest sex series.