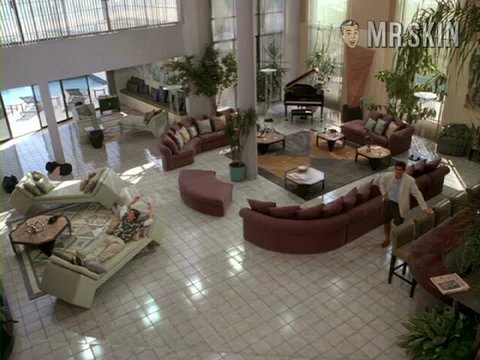 Despite an inauspicious debut in Songwriter (1984), tall and busty blonde Eloise Broady came into her own with her next role as Sexy Babe in The Texas Comedy Massacre (1987). She then appeared in the thriller Dangerous Love (1988), which remains her only skin onscreen to date, and the romantic horror flick To Die For (1989), where she played Girl at Party. Her roles still didn’t match her bust size, as playing Starlet at Party in Troop Beverly Hills (1989) proves. But she got a name, Tawny, in Weekend at Bernie’s (1989) and looked pretty sexy in that odd comedy about a dead guy at the beach. Promising titles such as The Big Tease (1999) and April’s Shower (2003) never fulfilled their promise. But with Eloise getting into the hit football drama Friday Night Lights (2004), where she played a non-nude Booster, maybe her boobsters will come out again to play soon.