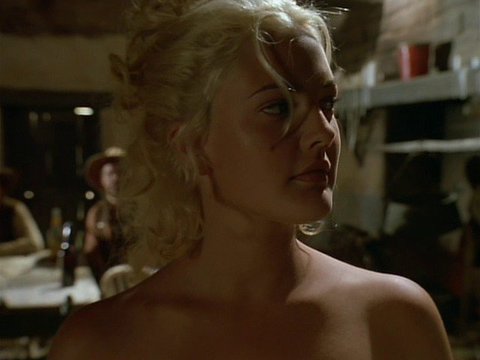 Women, just in their natural state, would seem to already possess an unfair advantage over men. The softer sex is arguably more attractive than hairy, apelike males and certainly makes better use of its enervating allure in rendering the opposite gender simple-minded and whipped. To arm these clearly superior beings with six-shooters and hunting rifles would seem to be overkill, and so it is no surprise that the four Wild West prostitutes who form the quartet of heroines referenced by the title of Bad Girls (1994) prove to be indomitable, prevailing against brute customers, a lynch mob's noose, a Pinkerton posse, and the snake-bellied varmint responsible for turning the cutest one into a woman of compromised virtue in the first place. The thing is, any man who's ever been expertly woman-handled knows that the ladies could easily have done all that without ever firing a shot.