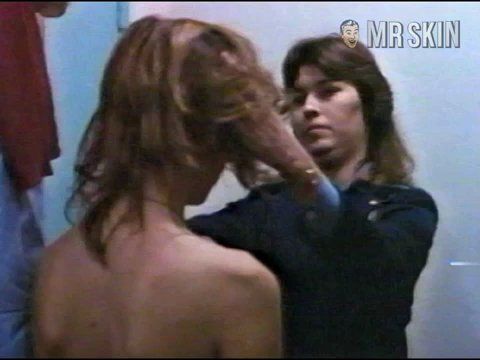 The Executioner's Song (1982)
Nude, breasts, butt 01:38:00 Buns and side view of right breast getting strip-searched.

The Executioner's Song (1982) is the story of convicted murderer Gary Mark Gilmore, played here by Tommy Lee Jones. What makes Gilmore's story unique is that after he was sentenced to death by firing squad, he actually made the state follow through. One less bad guy, one skintillating movie, thanks to Rosanna Arquette, who plays Gilmore's gal pal. There are several scenes with Rosanna riding Gilmore's love gun, but they're somewhat dark. A better look at her deadly curves comes after Gilmore is incarcerated. Rosanna arrives for a visit and is strip-searched by a lady prison guard with the greatest job ever, who gets to fondle her huge hooters and even rub that big booty. The Executioner's Song is music for your pants.