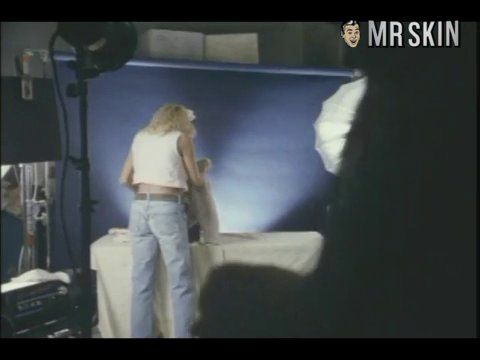 Rush Week (1989)
Nude, breasts, thong 00:08:00 Kathleen struts for a photographer in a super-sexy nurse get-up. Her boobies and thonged buns play a vital role in the course of this artistic endeavor.

College life is an education. But some can’t make the cut and end up underground undergraduates in the horror flick Rush Week (1989). When Pamela Ludwig hits the ivy league she’s more interested in getting ink than getting it on and joins the college paper. She stops the presses when her rush week exposé is sent to the back pages after a series of brutal murders. Comely coeds are ending up dead after posing for nude photographs taken by the cafeteria cook. Laura Burkett and Kathleen Kinmont offer their blue-plate specials, but it’s Toni Lee who gets straight Bs with her perv-formance. It’s almost enough to raise the dead, because Toni actually mounts a corpse. But the stiffy can’t get it up.