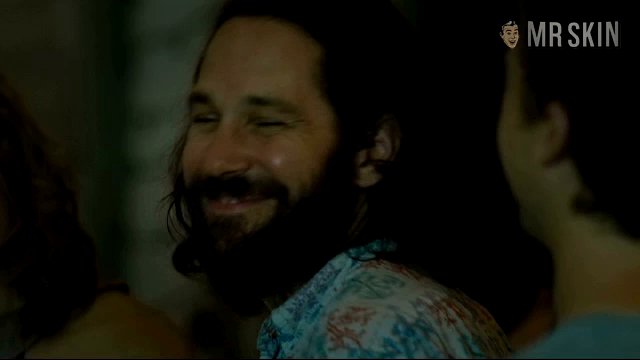 Our Idiot Brother (2011)
Nude, breasts 00:47:58 Alexia makes with the right side mam when she makes out in bed with Paul Rudd... before they're joined by another dude.

Paul Rudd is the titular teahead of Our Idiot Brother (2011). After Ned (Rudd) gets sent to the slammer for selling weed to a uniformed cop, he is dumped by his hippie girlfriend (who keeps his beloved dog, Willie Nelson) and must now go live in New York City with his three uptight sisters- confused lesbian Natalie (Zooey Deschanel), “perfect mother” Liz (Emily Mortimer), and driven reporter Miranda (Elizabeth Banks). With his trademark blend of childlike naïveté, stoned obliviousness, and Doors-lyric wisdom, Ned helps his sisters get their lives in order- though if you ask them, he’s doing his best to destroy them. Emily gives her hubby a peek under her towel, and Zooey gets up to all sorts of underwear-clad, lesbian-makeout mischief with Rashida Jones, but it’s Alexia Rasmussen who really gets us high in this picture. Alexia bares the dank buds on her chest as she straddles Paul Rudd before another dude crawls into bed and spoils the fun. What an idiot!