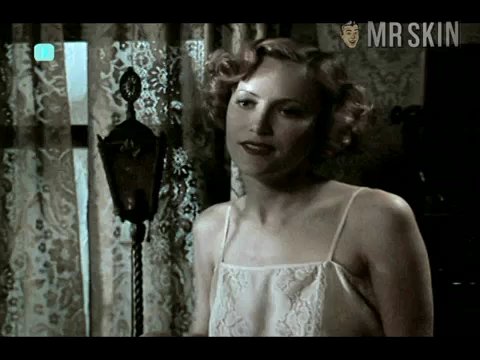 Last Man Standing (1996)
Nude, butt 00:18:00 Quick view of lovely Leslie's quivering caboose when she scampers off after she and her lover are rudely interrupted by dudes with guns.

Set during the dark, dry days of Prohibition, Last Man Standing (1996) (based on Akira Kurosawa's 1961 film Yojimbo) stars Bruce Willis as a wandering gunslinger on his way to Mexico to hide from the world. He drifts through Jericho, Texas, where two rival Chicago gangs are running booze-smuggling rackets, sneaking sweet hooch from south of the border to supply the thirsty Chicago underworld. One bunch is the Strozzi gang, led by Ned Eisenberg; the other is the Doyle gang, led by David Patrick Kelly, with Christopher Walken as his lieutenant. Bruce arrives in the midst of an uneasy truce between the formerly warring packs, and he gets it into his head to play both sides for maximum profit. Unfortunately he has a weak spot for the sweet spot, and ladies like lovely prostie Leslie Mann are such a vice that things might not turn out so nice for this wayfaring stranger. Keep your eyes peeled for Karina Lombard's briefly bared snards.