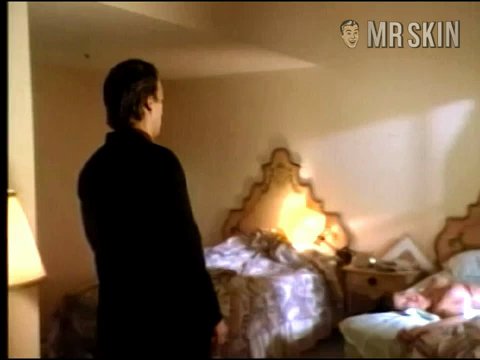 Katheryn Culliver Pierce made her debut performance as a corpse in the Jim Belushi/Lorraine Bracco murder-mystery Traces of Red in 1992. Although she had to do little more than lay in bed, playing dead, Katheryn caught our collective eye here at Skin Central, more or less because she performed her piece sans clothing. Sure, there’s a bit of blood smeared on her chest but thankfully, it doesn’t get in the way of her more-than-adequate hooters, which happen to be some of the nicest rib-pillows we’ve ever seen. To bad they weren’t exactly animated during their moment of gratuitously-naked glory…Katheryn subsequently took a bit of a hiatus before returning to Show Business in 1995 with a supporting role in the straight-to-video sci-fi horror flick Biohazard: The Alien Force. Unfortunately, although her hooters were full of bouncy goodness throughout the movie, they were also completely covered up. We guess it’s one or the other... although we’re hoping that one day it’ll be both!