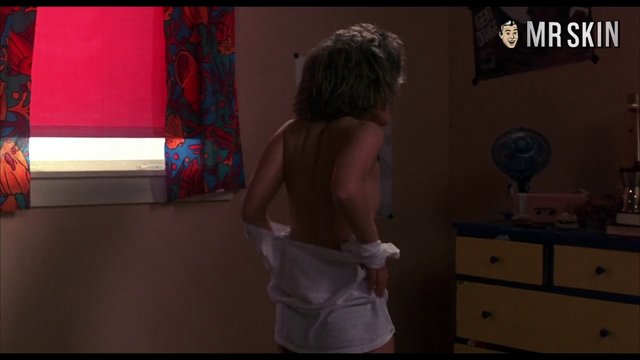 Sleepaway Camp III (1988)
Nude, breasts 00:00:21 Rashina starts the opening scene off right--by hopping out of bed, tearing off her shirt, and parading those itty bitty titties around her room. Nice tattoos!

Not much can be said of this comely One-Time Wonder’s career, mostly because there wasn’t much of it… and that’s really too bad. Rashina sports above average looks and although her career was exceptionally brief, she seems to possess the ability to recite lines meaningfully in front of a camera. We can think of quite a few starlets out there that can’t even do that, yet still have a career… How unfair.In any case, Rashina’s career was just about as short as they come. She only managed to appear in one flick, 1988’s Sleepaway Camp III: Teenage Wasteland and in that one flick, she only managed to make through the first scene or so before the slasher-lady runs her over with a truck. Just before then, though, Rashina bares her perky little itty-bitties in a lengthy, well-lit scene before heading out to her grisly fate. We’d sure like to see ol’ Rashina make a stunning return to the Skinema but we’re going to go right out on a limb here and guess that she won’t be doing that any time soon. What a drag.

4 Pics & 1 Clip
Nude, breasts 00:00:21 Rashina starts the opening scene off right--by hopping out of bed, tearing off her shirt, and parading those itty bitty titties around her room. Nice tattoos!
Live Cams - View all