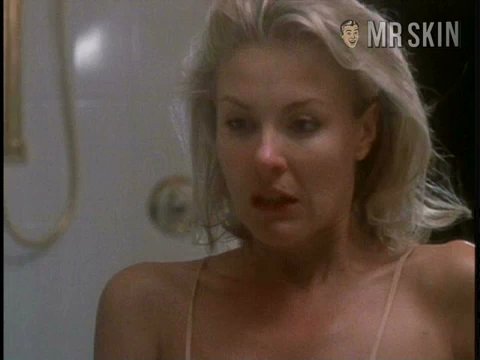 Hot Target (1985)
Nude, breasts, bush 00:11:00 Full frontal nudity after doffing her dress, then boobs and even pubes as she puts that shower head to work. Amazing!

The hot wife of a hotshot industrialist gets into hot water in Hot Target (1985) when she starts up a steamy affair with a guy she meets in the park. Simone Griffeth plays the wild wifey whose New Zealander hubby, Bryan Marshall, is as lacking in heart as he is swimming in money. But what Simone thinks is a passionate escape from the drudgery of holy matrimony is actually a set-up: The casual meeting in the park was not so casual after all, and the Yank Simone has taken to yanking is actually a crook! Soon there's a heist at the hottie's house, and Simone and her new man are trapped in a web that will require lots of softcore screwing to escape.