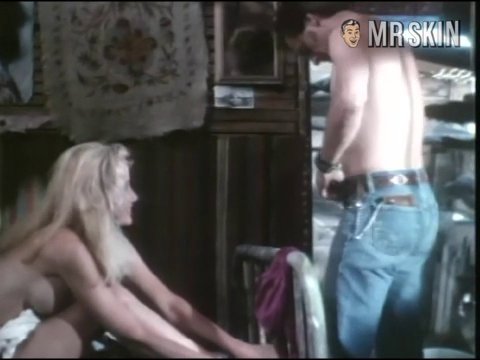 Cold Feet (1989)
Nude, breasts 01:00:00 Right boobular when getting on top of Carradine then side body shot and brief boobs sitting nude in bed.

Petty thieves who’ve summoned all their courage and cunning to engineer a big-time score, making a play in a tough game that is way out of their league, such doomed losers tug the heartstrings and the wry grin, especially when, as in Cold Feet (1989), two out of three half-ass crooks are played by Keith Carradine and Tom Waits. Bumblers with long-money dreams and short-sighted schemes, the loveable banditos hatch a plot to sneak a cache of illicit emeralds across the Mexican border into the U.S. The richly green gems are sewn inside a horse in a plan that seems foolproof, until an associate reveals himself to be a psycho killer. Will our heroes live to spend the money they’ve earned?