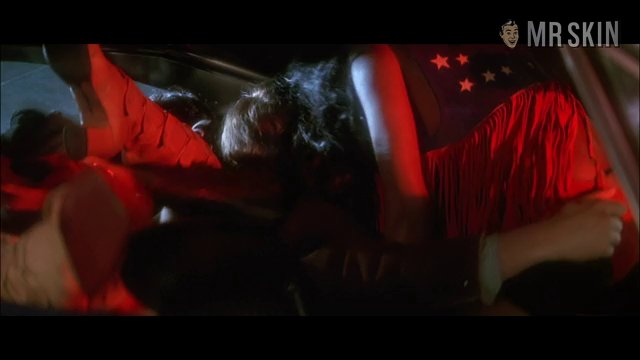 Cirsten Weldon is a sexy, Singapore born, Chinese-American actress who has been causing our hearts to race out of our chests for nearly three decades. Making her way to Hollywood at the age of 15, Cirsten had big dreams of hitting the big time. She spent her early years working mainly within the TV circuit landing herself roles on noteworthy TV shows like The Cosby Show (1984). Cirsten graduated from Loma Linda University and spent the majority of her professional life as a fashion designer for numerous big named celebrities. As for her acting career and when things got sexy, well we’ll just skip to the point already! The role which was stamped into the brains of most diry-minded movie goers was most definitely her part in The Doors (1991) in which we got to see her gorgeous big bouncy boobs in the midst of a hot sex scene with Jim Morrisons friend, Tom Baker (Michael Madsen). Although more on the vanilla side, you may also recognize Cirsten from the film Hard to Die (1990), but let’s be real here; if you haven’t seen The Doors (1991), or Cirsten Weldon’s boobs for that matter, you just aren’t recognizing this babe for the right reasons! With a nice big gorgeous rack and a beautiful face to go along with it; Cirsten Weldon takes sexiness to an entirely different level.