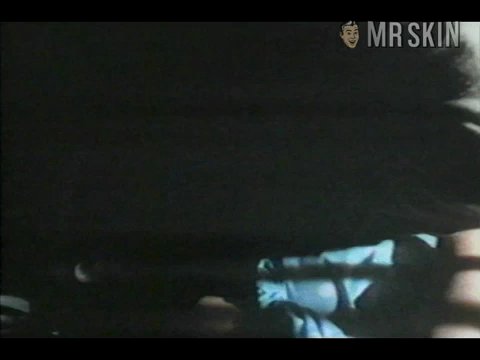 Bridget Holloman started her career alongside none other than the always sexy Debra Winger in the sex-tastic classic Slumber Party ‘57 which was released, quite ironically, in 1977. It’s basically a tale spun about a group of babes who spend the night in a big, empty mansion and relate their first sexual experiences to one another, then go for a tit-tabulous skinny-dip. That’s right, folks. Ten teen tits on screen all at the same time, Winger’s included! Talk about a must have for the dedicated Skinophile!Sadly, Bridget pretty much dropped off the proverbial map for the following decade, reappearing in 1985 as “Sexy Nurse” in Stoogemania. Sadly, in spite of her “Sexiness,” Bridget didn’t even come close to “Nakedness” in the flick. Nor in Evils of the Night later that year, after which she promptly disappeared again for another decade. (She must like long vacations…) In 1997, though, Bridget staged a monster comeback as “Blonde Woman” in The Empty Mirror, so there might be hope for a re-teat performance yet!