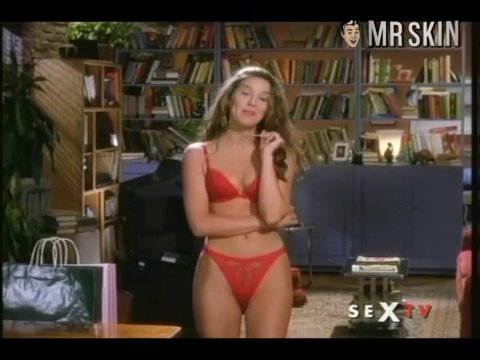 Dream On (1990-1996)
Sexy, underwear Bra and panties as she tries to seduce the luckiest sitcom acto who ever lived, Brian Benben.

Although now a respected actress, Andrea Parker started out playing low-rent go-go girls in Rented Lips (1988) and Earth Girls Are Easy (1988). She then shook her tight little bod on two 1989 episodes of Married... with Children that left viewers with erections. She finally managed a speaking role in the infamous Seinfeld episode "The Contest"—which made for some interactive TV, since her tight nurse uniform guaranteed that home viewers couldn't abstain from pleasuring themselves. Andrea then landed a recurring role as George Clooney's love interest on the first two seasons of ER and parked her ass on HBO for a sexy guest turn on the series Dream On. She then established herself as a TV domme while playing the cruel and underclad Miss Parker on the popular series The Pretender. She played the character through 2001 in Pretender TV movies before showcasing her comic talents as a snobbish foil to big gal Sara Rue on the sitcom Less Than Perfect.

The Adventures of Brisco County Jr. - as Rita Avnet

The Pretender - as Catherine Parker