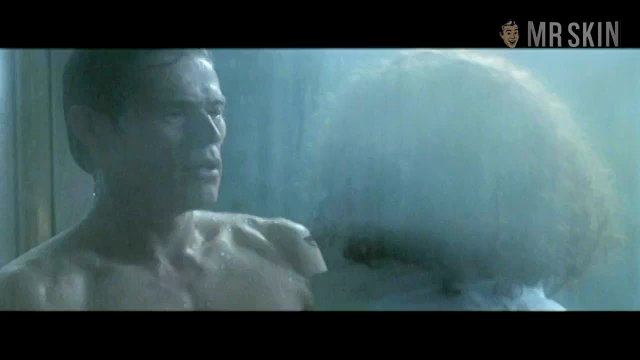 White Sands (1992)
Nude, breasts, butt, body double 01:11:00 BODY DOUBLE: That isn't MEM showing T&amp;A in the shower with Willem Defoe--it's a double. But after the cut, you see left nip in conjunction with her face--that's the real Mary!

White Sands (1992) is evocative of beaches and oceans and bikinis and, oh my, we’re starting to get exciting. But this is a crime-drama, not a teen-sex comedy, about a small southwestern town sheriff who finds a body in the desert with a suitcase filled with half-a-million dollars. Now that’s an invitation to trouble, but of course no one in the movies ever has that much sense. The cast includes Mickey Rourke, Samuel L. Jackson, Mary Elizabeth Mastrantonio, and Willem Dafoe. Also, Mimi Rogers is in the film, but surprisingly doesn’t take off her clothing.  Thankfully, Mary Elizabeth does and we get to see her fine breasts.