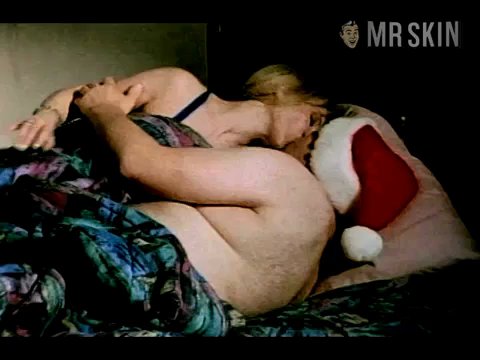 Blonde? Check. Massive boobs? Check. Got nude on film? Check. Sexy actress Terri Lewandowski is a real treat, especially when she bares her sweet teats like she did during a bedroom scene in the no-budget horror flick Santa Claws (1996). Mr. Skin would love to get his claws on those cans! Before she was baring boobs, Terri appeared in the straight-to-video flick Vampire Brides (1994), but she disappointed us by keeping her clothes on. Terri ended her acting career portraying a “victim” in the straight-to-video flick Psycho Charlie Returns Part 1 (1997). We’re the only victims in this equation, because Terri didn’t reveal her rack on camera again. But we still appreciate her skin-tributions to skinema. We’re not going to look a gifted blonde in the mouth!