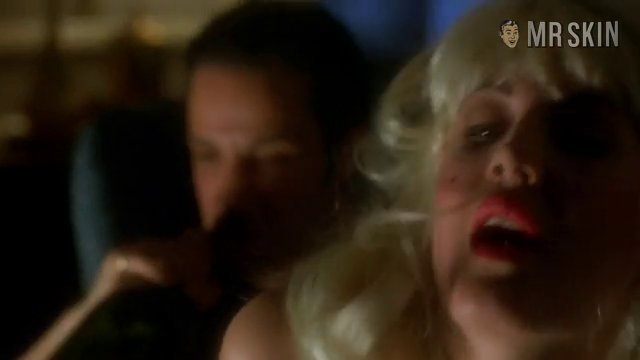 Bounty Hunters (1996)
Nude, breasts 00:28:48 Exceptional eggplants from Erin as she reverse cowgirls a guy on a chair.

You may not recall Erin Fitzgerald’s name on any marquees of note but you most certainly recognize her face. Since her debut on an episode of Madison back in the early-1990s, Erin’s kept fairly busy in a number of character roles, from appearances on such series as The X Files, Cold Squad and The Net to bit parts in movies like Josie and the Pussycats, Babette’s Feet and Seeking Winonas. Of course, she also voices “May Kanker” on the hit animated series Ed, Edd n’ Eddy but then again, that doesn’t exactly lead to much Skinage, now does it?Her bit part in 1996’s Bounty Hunters sure did, though! She plays a hooker-with-a-heart-of-gold in the flick (Oh, how original!) who needs protecting vis-à-vis the bounty hunters mentioned in the title. In order to let the world know that she is, indeed, a woman of the night, Erin bares her breasts whilst sitting on some surly fellers lap. Now that’s convincing!

4 Pics & 1 Clip
Nude, breasts 00:28:48 Exceptional eggplants from Erin as she reverse cowgirls a guy on a chair.