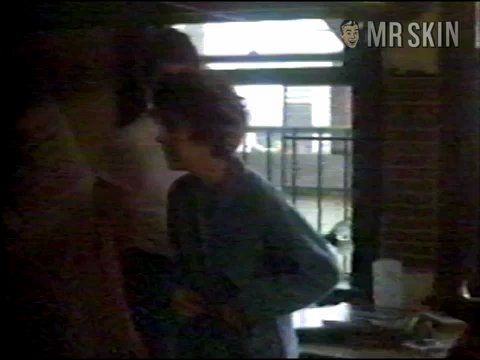 Sweet Revenge (1977)
Nude, breasts 00:17:00 Quick side-hootage and hinder as Stockard drops her robe and heads into the bathroom.

Since her uncredited part in The Hospital (1971), Stockard Channing has been wowing men with her unconventional good looks. She's also an acting icon, due to her incredible versatility as an actress and her ability to play quite a wide range of roles. She played a murderer in The Girl Most Likely to... (1973), an heiress in The Fortune (1975), and most recently the First Lady on the hit TV series The West Wing. She will, however, forever be remembered as Rizzo, the girl who pounced on a bed in her skivvies singing "Look at me, I'm Sandra Dee," in the smash-hit musical Grease (1978), opposite John Travolta. Sadly, even in her more youthful years, the fetching Stockard was quite a skingy lass but did allow for a nip slip here and there. The first occurrence of this rare phenomenon appeared in The Fortune, when Stockard bends over backwards on a bed. It's an exceptionally brief shot, so be sure to be ready on that pause button. The only other time that she ever revealed her luscious flesh onscreen was in Sweet Revenge (1977), in which she drops a robe whilst walking away from the camera. The movie is really difficult to find, but there is a nice look at her booty, as well as a brief glimpse at the side of her breast. That's film Stockard worth searching out.

The Business of Strangers (2001) - as Julie Styron

1 Clip
Nude, breasts 00:17:00 Quick side-hootage and hinder as Stockard drops her robe and heads into the bathroom.

Batman Beyond - as Comm. Barbara Gordon

Out of Practice - as Lydia Barnes

Sesame Street - as Victim of the Number Painter

Walking with Beasts - as Narrator