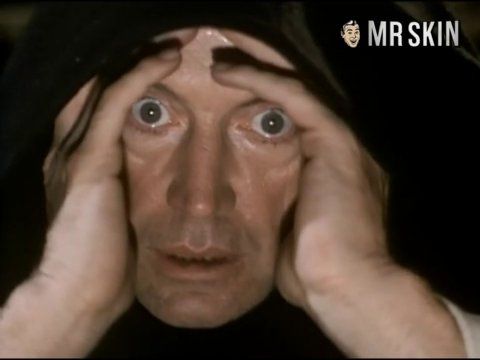 The Pit and the Pendulum (1990)
Nude, breasts, bush 00:21:00 Rona gets stripped to her full-frontal loveliness as a bunch of deviant priests poke and prod the potential witch.

Some beauties are like rainbows, glimpsed but for a brief moment and then gone, never to return. Such is the story of darkly arousing Rona De Ricci. She started her career off with a bang, starring opposite heavy-hitters Armand Assante and Raul Julia in The Penitent (1988). The film failed at the box office and Rona faded from the scene. But she returned for one triumphant comeback with her banging body in the straight-to-video adaptation of Edgar Allan Poe's The Pit and the Pendulum (1990). Don't rent this video looking for an accurate portrayal of Poe's masterpiece but for Rona's masturbation-worthy piece of ass. The movie is not only Rona's final appearance onscreen but also her skin debut--and it's a keeper. She's stripped naked by some inquisitional priests. They probe her fluffy black muff, bouncing boobs and meaty butt. Rona's swan song is enough to make your flesh organ sing.

1 Pic & 1 Clip
Nude, breasts, bush 00:21:00 Rona gets stripped to her full-frontal loveliness as a bunch of deviant priests poke and prod the potential witch.