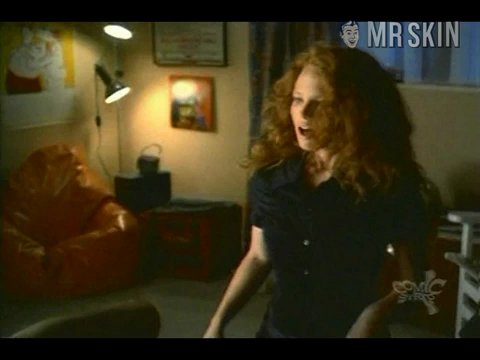 Hotel de Love (1996)
Nude, breasts 00:08:00 Red-maned Raelee strips her top off to expose her tiny-nipped na-nas and leaps on her guy. Who could resist?

Raelee Hill is best known as one of the sexy out-of-this-world creatures that inhabit the sci-fi TV hit Farscape. But she almost didn't get on the series as Sikozu. Originally the redheaded hottie auditioned for the very different role of Utu-Noranti Pralatong. When that went to Melissa Jaffer, the show's producers decided to create a role especially for raunchy Raelee because she'd impressed them so much. This Australian actress has had a swift rise to fame in her own country, with a number of recurring parts on Oz's top programs, including playing Serendipity Gottlieb on Neighbours and Constable Tayler Johnson on Water Rats. But her breast role to date has to be Hotel de Love (1996), in which Raelee exposed her freckled Hills. That's a hotel everybody needs to check out!

1 Pic & 1 Clip
Nude, breasts 00:08:00 Red-maned Raelee strips her top off to expose her tiny-nipped na-nas and leaps on her guy. Who could resist?