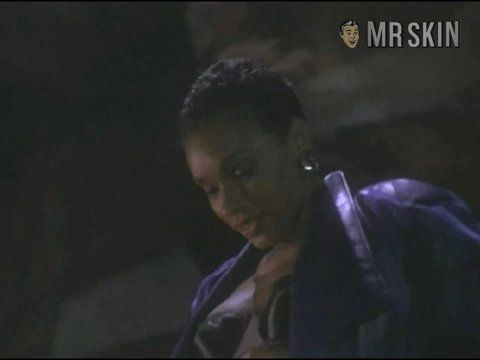 Out of Sync (1995)
Sexy, underwear Victoria Dillard is skintastic in this sexy scene!

The BET Network produced flick Out of Sync (1995) stars rap superstar LL Cool J as Jason St. Julian, a popular hip-hop nightclub DJ that went from stardom to hard times thanks to his penchant for drugs. Now Jason has hit rock bottom, he’s living in a shithole apartment, he’s in deep with a loan shark, and because of his sketchy past, he can’t score any major DJ’ing gigs, leading him to drop the beat at illegal raves. Hey, the film was made in the mid 90s, give ‘em a break! When Caldwell (Howard Hesseman), a pushy detective crashes Jason’s latest rave, placing the DJ under arrest, the two dudes negotiate a deal that keeps Jason out of jail and turns him into a police informant to get the goods on Danny (Ramy Zada), a prominent drug dealer. The DJ-turned-snitch uses his MC’ing skills to get in close to Danny, but he soon finds himself getting close to the drug-pusher’s gal Monica (Victoria Dillard), causing nothing but more problems for Jason that could easily lead to his demise. Victoria Dillard steals the flick when she shucks her clothes and bares her chocolate chest treats in the shower. Out of Sync will make you hard in the dink!

Nude - as Debra B. Collins/Dead Deb