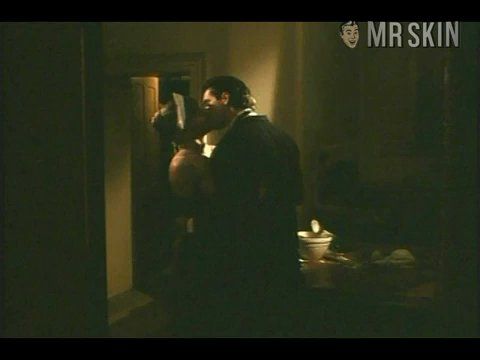 Flynn (1996)
Nude, breasts 00:17:00 She shows her right one twice in this scene. Check out her protruding papilla mammae.

The Australian actress Michelle McClatchy came into her own as an actress in the late 80s and early 90s, appearing in a lot of TV shows, some of which include Acropolis Now, Fast Forward, The Flying Doctors, Bingles, and comedy prank show Just Kidding! Following this she did one of the only feature films of her career, called Flynn (1993), in which she plays a sexy maid who does a little more than her required cleaning duties. In one all too quick scene, this sexy brunette maid is seen with her top down, making out with a dude while another watches in on the action from around the corner. Mostly after this candid can exposure Michelle kept on doing TV roles throughout the remainder of her career. Her most recent work was on Blue Heelers, which ended in 2005.

3 Pics & 1 Clip
Nude, breasts 00:17:00 She shows her right one twice in this scene. Check out her protruding papilla mammae.