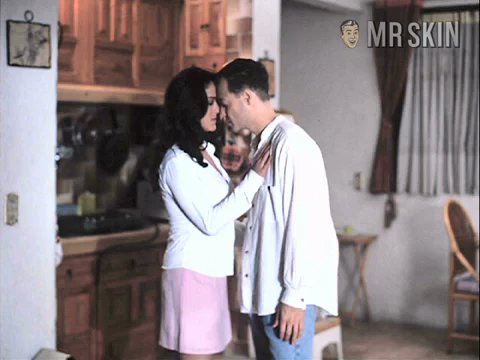 Bravo (1998)
Nude, breasts 00:12:29 Dark-skinned beauty Maribel offers up some tit-peeks when she disrobes and hits the sheets with some guy.

Maribel Oporto burst onto the Skintertainment Scene back in 1998 with a bit part as “The Love Interest” in Bravo. Naturally, she’s the love interest of none other than Carlos Gallardo, who plays an ass-kicking mariachi-type feller in the flick. He was a Mexican Secret Service agent until his prick accidentally wound up in Maribel, who happens to play “The President’s” daughter in the movie… (which is about the only difference between Bravo and Gallardo’s first movie, El Mariachi…) Regardless of our hero’s musical leanings and penchant for kicking Bad Guy Butt in tight black jeans, Maribel more than pulls her weight in the movie. Sure, it’s a bit part but when she shows her impressive rack in bed with the guitar-and-gun-slinging showboat, it’s pretty difficult to notice much else going on. Unfortunately, it seems to be the only movie she’s been in thus far, although we’re still hoping for a follow-up flesh-flash or two, that much is certain. Never say never, right?

6 Pics & 1 Clip
Nude, breasts 00:12:29 Dark-skinned beauty Maribel offers up some tit-peeks when she disrobes and hits the sheets with some guy.
Live Cams - View all